Electoral Calculus has pioneered advanced regression techniques for analysing polling data. We are a leader in applying these methods from mathematics, statistics and computing to market research.

What are regression (MRP) methods?

Regression methods are statistical tools for analysing polling. They include the well-known MRP process (multi-level regression and post-stratification), but extend beyond that to a wider class called RPP (regularized prediction and post-stratification). These methods, which have features in common with some supervised machine learning techniques from the IT industry, enable us to give deeper insight to clients and deliver more accurate results.

We also believe in demystifying these approaches, explaining the basic principles, and helping you find the best regression techniques for your particular project.

“Regression works by polling a set of people and asking them not just the target questions (such as voting intention) but also for other facts about themselves.”

Regression works by polling a set of people and asking them not just the target questions (such as voting intention) but also for other facts about themselves. These facts, which are known as "predictors", can include demographic characteristics such as age, gender, location, and education as well as political characteristics like their votes in previous elections and the political alignment of their constituency. So far, this is just like conventional polling.

But the next stage is different. Now we "regress" people's target attitudes against their predictor variables. In other words, we estimate the statistical relationship between the various predictor variables and someone's target attitude. For example, we might find that younger people are more likely to vote Labour and Green and that older people are more likely to vote Conservative and Brexit. Or that someone in the south of England is more likely to vote Liberal Democrat than a similar person in the north. These links are usually not surprising, but the important thing is that we can quantify each relationship in numerical terms.

Finally, we apply the regression data to everyone in each area of interest (such as a constituency or district) to estimate the individual probability that the people there have a particular target attitude. For political polling, this gives an idea of how many people in each constituency support each party, from which we can work out which party is likely to win that seat.

What are the benefits of regression techniques?

There are several benefits to using regression techniques over conventional polling analysis:

On accuracy, we have conducted many practical experiments to validate the accuracy of regression analysis over conventional polling analysis. Using a political example, regression methods out-performed conventional methods at three out of the last four UK general elections (the other was about the same). We used the same fieldwork for each comparison, with the only difference being the type of analysis. Full details.

Secondly, the regression also creates profiles of likely supporters of a target attitude. This can be used to inform marketing campaigns either via social media or conventional approaches.

The final benefit is one of the key advantages of these methods. We can use regression to infer the likely attitudes to the target question(s) in sub-samples of the population. This can be done even for very small sub-samples, such as the population of a district council ward (approx 5,500 people), or a census output area (200 people). The power of regression means that we can make these estimates without having to sample directly from each sub-population. We can estimate, for example, the attitude of people in each of the 8,800 district council wards without having to poll each ward separately. This dramatically reduces the costs of such a project. 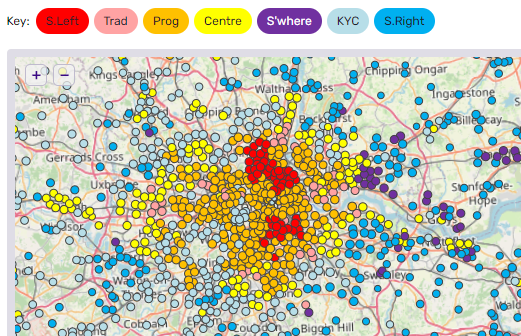 What polling questions are compatible with regression?

The main technical requirement is that the target questions must have some linkage (also known as dependency or correlation) with the predictor variables. We are happy to advise on individual cases to assess if a particular target question is likely to be suitable.

Can I use my own database(s) with your method?

Yes. We are happy to include additional data from the client in the regression. This is often either a proprietary database that the client maintains, or data from third-party databases, such as credit reference agencies.

We can use these additional data either to get a better regression, through an increased set of predictor variates. Or we can also use them to infer likely target attitudes of sub-samples or segments of the client database population.

Not with us. Some pollsters recommend very large poll samples for regression work, which can increase the costs significantly. Electoral Calculus has pioneered lower-cost techniques for regression polling, which makes the costs much more affordable. These techniques have been extensively tested, and have been demonstrated to be as accurate as, if not slightly better than, costly super-large samples.

Will this work with my existing pollster and polls?

We are equally happy to commission new polling on your behalf.

How do I find out more?

If you have more questions or would like to check whether a potential poll is suitable for regression analysis, or get a quote for a particular project, click below to see how we could work together:

We provide innovative and affordable MRP and consulting

Specialising in quantitative analysis and models for electoral and other market research projects, discover how we can work together.