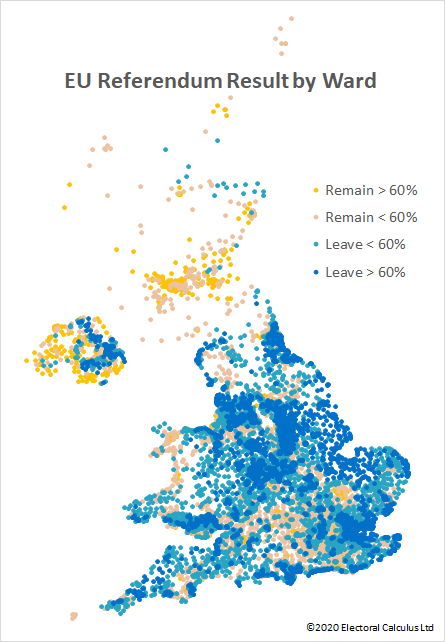 Electoral Calculus has an unrivalled dataset of UK political party support and political attitudes down to a very detailed geographical level.

This dataset has unique application to election candidates and campaigners enabling them to identify precisely those areas which need to be targeted for the campaign.

Electoral Calculus has conducted a major analysis of political attitudes and voting patterns. This is available at two different levels of local detail. The first of these is the local council ward, in which people cast votes every four years or so for their local district or borough councillors. There are around 8,800 wards in the UK, with an average of 5,500 voters in each one. Wards are naturally sub-parts of parliamentary seats, so information gained at a ward level can be very helpful for the ultimate analysis of an entire seat, and also provides valuable campaign information.

The more detailed geographical level is the "Census Output Area", which is the finest level of census reporting. These output areas are very small, consisting of around one to three streets or a few postcodes. There are over two hundred thousand of them in Britain, with an average of 200 voters in each one. Output areas can be a powerful way to target messaging by post, telephone or direct canvassing.

Contact us using the contact details at the bottom of the screen for details and pricing for your project.